2020 has been one of the years that held the most personal and professional growth for me. Crises tend to do that. It’s also been a year that I’ve found extra hard to keep together, to remember the things that went on, both internal and external. Here are some of the things I’ve learned this year. Collating them somewhere helps me remember how I changed as a person this year. The self-mythologizing seems to help keep time from mushing together, and to put things down in a way that lets me remember if I was right or wrong without the unreliable lens of pure memory.

2020 was the year I learned to love the grind. For the longest time, I believed in the power of ideas to change the world. I had believed that the right algorithm could change humanity simply by existing. It was this belief that propelled me in my search for ways I could contribute, to finding that right idea, to create. 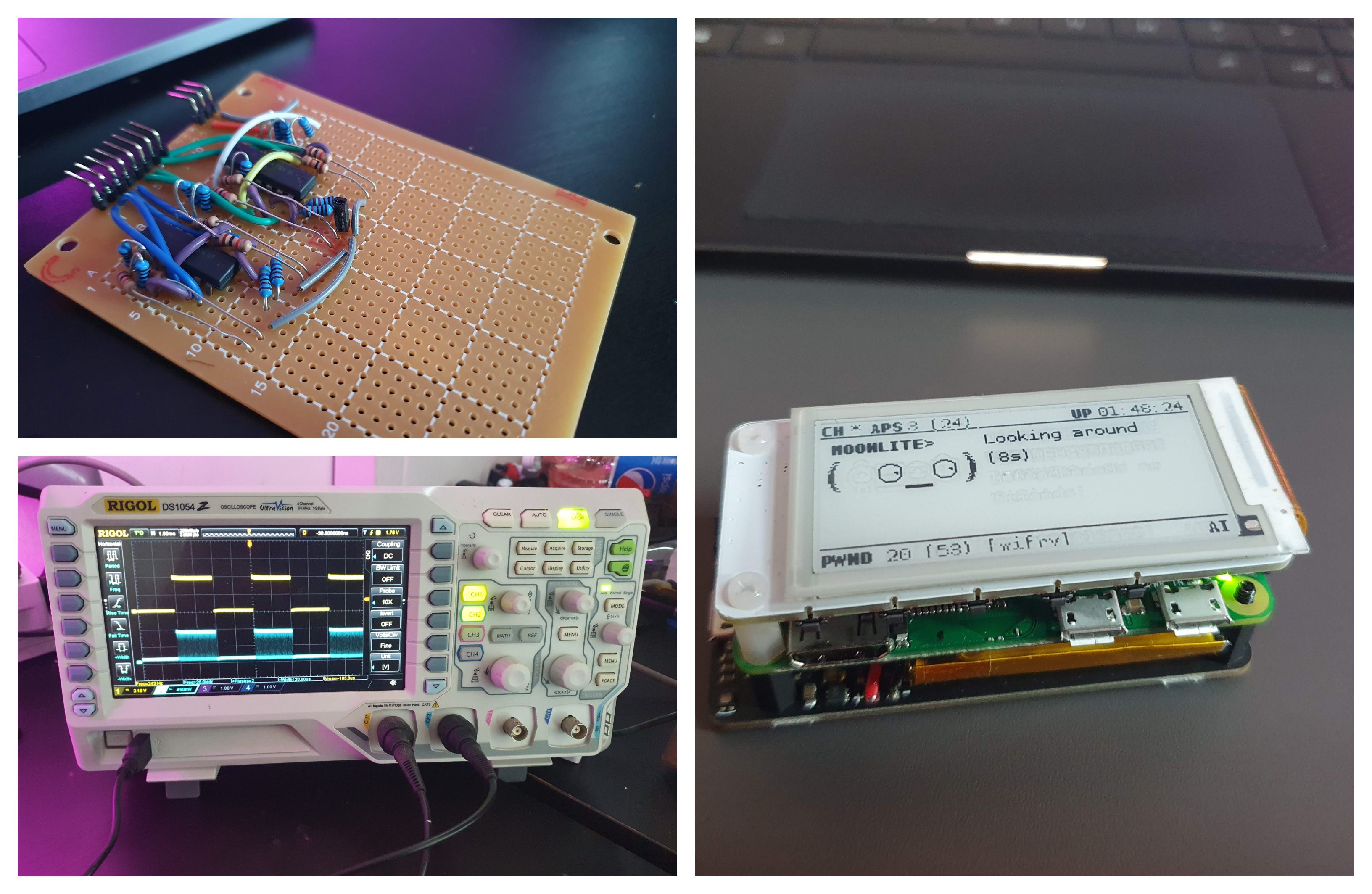 I created many things this year - a pandemic intelligence tool for maritime, a communications tool for port agents, a GIS tool for fleet-monitoring, a logistic baseline correction tool and accompanying peer-reviewed paper for use in Physics and Chemistry, a yield-estimation tool for compounded farming assets, the cutest little wifi sniffer (see above), a decentralized timing queue for network jobs and an arbitrage calculator for decentralized finance, among many other things. Also included is me wallpapering my study, as you can see above. Not sure if it’s really creation, it was just hard and I’m proud of it.

Yet as the pandemic carried on, I found myself realizing that my belief in the power of creation had been weakening over the past few years. I had been coming to the understanding that to believe in the power of the idea alone was to invalidate the tireless work that went with it and behind it. The people I respected and admired (not least of whom is my co-founder on Greywing, Nick Clarke) didn’t just create, they stuck around to perfect and adjust. They stuck around to do the far less exciting job of customer support. Creation was not enough in itself, and the work needed to shape a raw concept to the real-world - to adjust it to what can be explained, sold and used - was just as real. If I wanted to contribute, the easiest and hardest thing I could do would be to stick around and put in the time - day in, and day out. To do that, I need to respect and love the work of maintaining.

This was also the year I learned to breathe better. As stresses mounted, rooms got smaller and friends further away, I realised I had gotten used to holding my breath. Not in the physical sense, though I might as well have been. Looking back the past few years, I found myself working in sprints that couldn’t sustain themselves, pushing myself through sheer force of will and ignoring collateral damage to get to some goal. A publication, a high score, a funding round. This was the year it came to a head. As the state of the world became uncertain for an uncertain period of time, I found it harder and harder to justify the deadlines, to assure myself I would be done with time to heal. It seemed clear that if I needed to heal, I needed to do it while doing everything else.

Sometimes you can be taught a lesson a hundred times, but it takes a hundred and one for something to click. This was one of those. Learning to live and work sustainably - in a way that I would be okay repeating another ten years - is something I see and value in others now. I’m late to the party, but I’m glad I’m here.

Finally - and if you’re with me so far, thank you for reading - this was the year I realized I wanted to be reliable enough to reach out. I was raised on Stoicism, that to be a good person one had to learn to take care of oneself. I wanted to be someone who could take care of themselves, who wouldn’t spill himself onto others in a world that had its own problems. I was moderately successful at it, but working with my current partner, as well as those that have let me into their lives, has made me realise that it goes further. There are people in my life I can rely on to take care of their problems, and there are those I can rely on to reach out when they need help. I’d like to be the latter. There are those in my life I worry less about cracking one day, or burning out from never having gotten the help they needed. I’d like to be a little more like them.

(Of note were also the observations about flow energy and residual energy, it’s something I strongly credit with helping me survive the year.)

When the virus hit, I was working on a maritime security marketplace called Greywing. I’ve written about it before. What we experienced as cases stacked up was a complete drop in the demand for maritime security, as clients focused on bigger problems. Digging deeper, we stumbled on the mounting crisis in crewing, where seafarers were finding themselves unable to leave vessels when their time was up, or go to work when they had to. The maritime industry - at the time - found itself holding its breath, hoping things would change.

We were sure it wouldn’t - even if a global pandemic resolved itself in a day, borders once closed do not reopen easily, same as breaking an egg. We weren’t living in a globalised world of free travel anymore, and we knew it would be years before we ever got back.

So we got to work. A two-man company has many disadvantages - lack of resources, lack of time, too few hands when typing - but cornering velocity isn’t one of them. We could turn things around, build and deliver at a speed only possible at our size. We had a product out in two weeks, and had real-world usage and a customer in a month who believed in what we could build. We released every feature we could as part of the free-tier (still do), as we worked with industry bodies and the government to help as many as we could in any way we could. Over the next six months, we would grow to 4000 vessels and 30000 crew on the platform, with over 5 million kilometers routed and hundreds of thousands of crew change options considered. We’ve grown to many more clients and over 300K in annual recurring revenue, and a team of four that believe in this space, this solution and the impact we can have. We hope that in 2021, with the new team and the help of the good people at Y Combinator, we can do better.

Technology is a force multiplier, and the best we’ve got. It’s the reason our world kept functioning in some capacity - with weddings and birthdays and relationships that kept going even when we couldn’t be with each other in person. It’s also the reason two guys in Singapore could help save the life of a master seafarer out in the middle of ocean, by cutting the time needed to get a sick man off a vessel from days to minutes.

Above are all the flights, vessels and maritime routes that passed through Greywing in the last six months. Click here to replace it with an interactive version that might take some time to load.

The world went to shit in 2020, and if we could be glad about anything, we’re glad that we had a chance to help. We’re glad that we had a hand in making sure that the central arteries of the world - the ships that move our packages, our fuel, our people - kept running when we needed them most. We’re glad we were able to provide some respite to the men and women who do this job (sometimes thanklessly) to do them better and to find some more time to spend with the people in their lives. We’re glad we’re helping an industry be stronger and better prepared for the next systemic shock, and we’re thankful for the opportunity. We’re thankful for the companies that believed in the vision when we didn’t have much, the women and men who took the leap of faith and helped us help them. Greywing may not exist today without them, and that’s not something I’ll forget.

That’s it. My singular personal goal for 2021 is to get better at finding peace in chaos. If this year has taught me anything, it’s that you cannot fight entropy. Change is inevitable, and so is chaos. Learning to breathe better and find peace in the middle of chaos, war, stress, work, death, and life is something I hope to do in 2021. It’s what I wish for you. I’d also like to lose some more weight, or find better junk food so I can feel better about the weight I do have.

Here are some of the habits, technologies and practices that I’ve found helpful this year.

Johnny Harris’ tip of deleting your photos to remember them better has helped me clean up my albums and made a huge difference. I definitely recommend it.

This was also the year of me - after many years of trying to improve my wakefulness with supplements, tricks and detoxes - realizing that the answer was as simple as working out, sleeping and eating better. I’ve gotten quite good at the first one, but the other two are things I hope to work on more next year. The biggest problem with these three things are that they have large timescales for returns on investment - preventing flow states - and unpredictable troughs of moving backwards before things get better. You just have to trust in what you’re doing and keep long-term goals, which is something that I still find difficult. Better Ideas’ Why you’re always tired is an interesting watch.

2020 was also the year I finally picked up PostGIS and realised just how powerful it was. I’ve also become more confident in working with different coordinate systems, performing various intersection queries and finally learning - after a week of banging my head against a wall - that GeoJSON has a right-hand rule.

I also joined Kalibra in their ambitions to build healthier men and women through technology, and left them better than I found them this year.